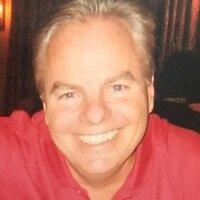 Christopher Peter Rayner, 60, passed away in Wilmington, North Carolina on May 28, 2022 after living his last eight years with early-onset dementia. Despite his diagnosis at 52, Chris lived with “no regrets” and one of his goals was to “pack a church.” Chris was born second-to-last of nine kids to Jane and Dr. Edward Rayner in Rockville Centre, NY, on September 15, 1961. Being born into a large Irish-Catholic family shaped Chris’s formative years and cultivated his lifelong desire to share generously and help others. Chris and the Rayner kids, along with their 12 Reilly cousins and eight Squillace cousins, spent summers in Point Lookout, NY - where Chris made mischief and memories and great friends including his best friend, Dino. Gregarious, creative, intellectually curious, and outgoing, Chris met new friends virtually everywhere he went, and even after he was diagnosed with dementia, he continued to strike up conversations and make connections with strangers. Chris met his wife, Mary, at then-Maria Regina Catholic High School in Uniondale when they were 15 years old, and upon graduation she wrote in his yearbook, “No matter what happens, I’ll always be there for you.” And she was — she cared for him with love until the end. Chris was a CPA who owned his own firm for many years, often working from his car in traffic on the Cross Island Expressway as traveled from client to client. After he and Mary had four children together, who meant the world to him— Kaitlin, Brittany, Christopher and Lindsay— they moved to Westchester, where he enjoyed playing ice hockey with his son and mowing the lawn together on Saturdays for 10 years before moving to North Carolina. Chris almost always had a Diet Coke nearby, loved cookies and dinners at his favorite restaurant, Peter Lugar’s. He enjoyed being a workaholic, lived in the moment and regularly told people that he loved them. Throughout his illness, Chris and Mary were supported by an amazing group of friends in Wilmington, and in the end, by his caregivers Carol and Crystal. He never lost his spark and charisma - proof that his spirit will never die. An organ donor, in his final act of generosity, Chris gifted his brain to Wake Forest University’s Alzheimer’s research study, where it will hopefully help scientists discover a treatment and cure.

To honor Chris with the sendoff he deserves, we are hoping to “pack the churches” - there will be a memorial gathering at Andrews Funeral Home at 1617 Market Street in Wilmington, NC on June 7 from 4 – 6 p.m., another memorial gathering at Thomas Glynn Funeral home at 20 Lincoln Avenue in Rockville Centre, NY on June 16 from 4 – 8 p.m. and a memorial mass at Saint Agnes Cathedral, 20 Quealy Place, Rockville Centre, NY on June 17 at 11 a.m.. I

n lieu of flowers, please consider donating to Lower Cape Fear Life Care hospice services– their care and compassion truly made his final days meaningful and as comfortable as possible.