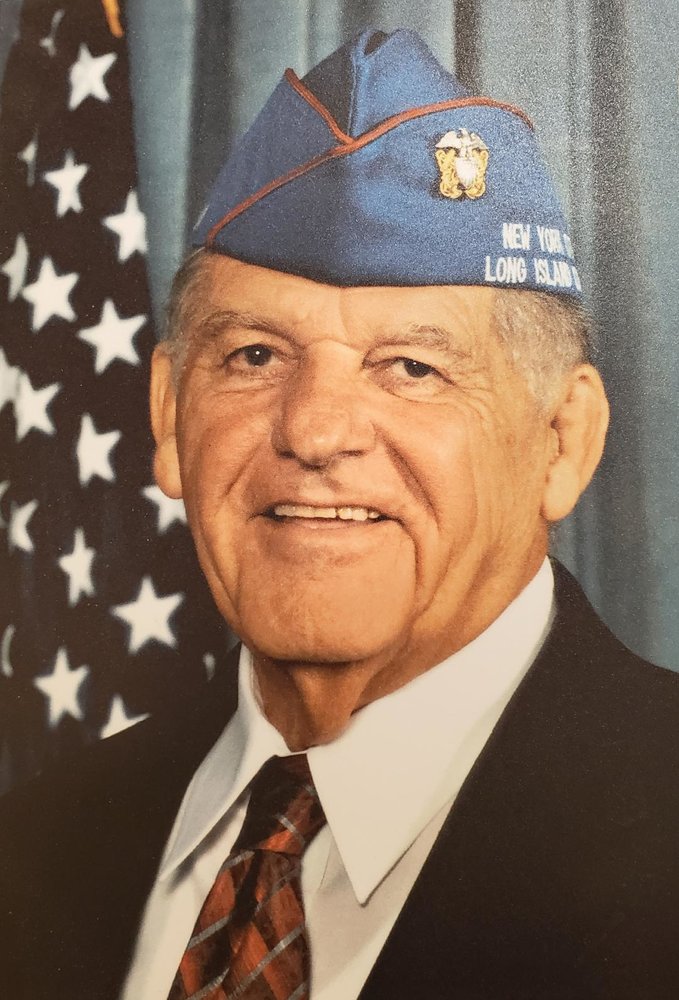 BRANDI Daniel, J. On November 23, 2019 of Oceanside, NY. Beloved husband of Grace. Loving father of 6 children, 13 grandchildren and 11 great grandchildren. Dan was decorated Veteran of the US Navy serving during the Korean War in the battle of Wonsan Harbor. First recipient of the NYS Senate Veterans Hall of Fame. President of the Chosen Few. Retired Sgt of the Rockville Centre P.D. Past president of the RVC PBA and former director of security of the Rockville Centre UFSD. Friends may call Monday 4-8 PM at the Thomas A. Glynn & Son Funeral Home 20 Lincoln Ave Rockville Centre. Mass of Christian burial Tuesday 10 AM St. Agnes Cathedral Rockville Centre. Entombment to follow at the St. Charles Cemetery.glynnfh.com

Daniel J. Brandi has earned a place among New York State's elite veterans with courageous and compassionate service to his country during the Korean War and dedicated efforts to protect and improve his community.  After joining the United States Navy in 1948 at the age of seventeen, Dan completed three tours of duty in the Korean War, primarily as a Gunner's Mate aboard the USS St. Paul CA 73 Heavy Cruiser.  In all Dan spent twenty seven months in the war zone while participating in eight major military campaigns.  Dan took part in some of the most intense battles of the war including the battle of Wonsan Harbor, which has been recorded as the longest naval siege in U.S. Military history.  IN recognition of his heroic service, Dan was presented with the Presidential Uinti Citation, the Korean Service Medal with eight battle stars, the Combat Action Ribbon, the Korean War Medal, the National Defense Medal, the United Nations Medal, the Good Conduct Medal, the China Service Medal and the Occupation Medail-Asia.  After his honorable discharge, Dan spent 22 years as member of the Rockille Centre Police Department, retiring as a sergeant.  He is the former director of security for the Rockville Centre UFSD.  Dan was a member of the Nassau County Police American Legion Post #1050, the Korean War Veterans Association, the Untied War Veterans of Nassau County, and the the New York City/Long Island Chapter of the Chosin Few.

In lieu of flowers the family requests donations be made to the Stephen SillerTunnel to Towers Foundation in Dan's name.