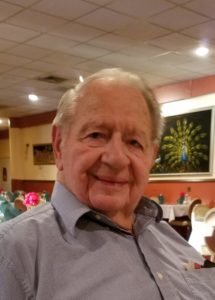 George Christian Wagener, 96, of Fort Myers, passed away Tuesday, August 14, 2018.  He was born July 6, 1922 in Brooklyn, New York to George Christian Wagener, Jr. and Lillian Reydel.  He moved to Fort Myers from Rockville Centre, NY in 1994.  He was a member of the Antique Auto Association and the Hudson Essex Terraplane Club.  He proudly served the United States Army during World War II where he worked in communications, coding and decoding messages.  He supported many charities, especially those involving animals.

Mr. Wagener is survived by his daughter, Mary Griffin Seal (Stephen) of Fort Myers; his grandchildren: Scott Griffin (Gretchen) and Laura Griffin and his two great grandchildren: Natalie and Noah.  He was preceded in death by his beloved wife of 59 years, Oralynn Wagener in 2012.

Friends May Call Tuesday 6-8 PM at the Thomas A. Glynn & Son Funeral Home.  Interment Wednesday 10AM at The Evergreens Cemetery Brooklyn, NY

In lieu of flowers, memorial contributions may be made to ASPCA or the Humane Society

Share Your Memory of
George
Upload Your Memory View All Memories
Be the first to upload a memory!